Penny is a 1 year old, female spayed cat who came to City Vet as she had been coughing for some time. On examination, she was found to have inflammation at the back of her throat and a slight increase in respiration sounds. Antibiotic treatment was prescribed. When she returned for a recheck examination, the cough was persisting and as it had not resolved with antibiotic treatment, she was tested for lungworm. Penny was found to have lungworm (Aelurostrongylus abstrusus) larvae in her faeces.

She was then treated with Broadline and when she was re-examined two weeks later, the cough had resolved and she was back to normal.

Different species of lungworm can affect cats and dogs. Infection can often be inapparent but sometimes coughing can start suddenly and be violent with owners thinking there is something stuck in the throat. Any weaned cat or dog capable of eating, and with access to, slugs or snails, can be affected and there is no seasonal variation. Lungworm in dogs is caused by Angiostrongylus vasorum.

Reggie is a 5 year old, male neutered cat who came to City Vet as he had been straining to urinate since the previous evening. On examination, his bladder was distended, meaning it was full and swollen, and he was quite painful. He was diagnosed with a urethral obstruction. A urethral obstruction occurs when crystals blocked the flow of urine through the urethra and so it cannot be passed.

Reggie was admitted for general anaesthetic and to pass a urinary catheter to allow him to urinate. Once he was anaesthetised, a catheter was placed in the urethra and the bladder was emptied. The catheter was then sutured in place. He was also put on I.V. fluids to dissolve the crystals in his urine. Overweight, indoor, sedentary cats aged between 2 and 10 years tend to be more prone to the type of urinary crystals found in Reggie’s urine. 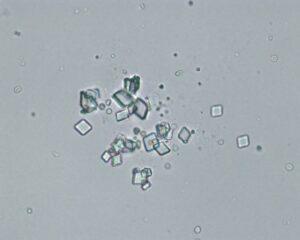 Over the following days, Reggie became much brighter in himself and once he was able to urinate on his own, he was discharged. Reggie now needs to be exclusively fed a prescription diet called Hill’s Prescription C/D for the rest of his life. The diet is designed to alter the pH of the urine and stop the build-up of further crystals in the future.

Posted in Events, Health, Resource
We use cookies on our website to give you the most relevant experience by remembering your preferences and repeat visits. By clicking “Accept All”, you consent to the use of ALL the cookies. However, you may visit "Cookie Settings" to provide a controlled consent.
Cookie SettingsAccept All
Manage consent