Spencer, a 2 year old male ferret came to City Vet for his annual health check and booster vaccination, an important visit for any pet.

He was assessed to be fit and healthy apart from his teeth which needed to be cleaned. A few days later, Spencer was admitted for a general anaesthetic and dental cleaning. 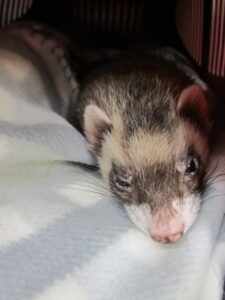 As Spencer is such a small animal, care had to be taken to ensure he was kept very warm while he was under anaesthetic. We also had to make sure he was not without his food for too long so he was not fasted. Once he had his teeth cleaned and had recovered from the anaesthetic, he was offered some of his nuts that his owner had brought in with him. He very happily tucked in and shortly after burrowed under his blanket and went to sleep.

He went home to his very happy owner that evening.

Spot is a one year old, male Jack Russell Terrier who came to City Vet as a referral patient. He had been hit by a car the previous day while out looking for a “girlfriend”. He presented with a distended abdomen and was very depressed. X rays had been taken and it was found he had a fractured pelvis. An ultrasound exam was carried out and fluid could be seen in his abdomen.  An abdominocentesis was then performed (a needle is carefully inserted into his abdomen and any fluid withdrawn) and it was diagnosed that, more seriously, his bladder had ruptured after the impact. This was life threatening for poor Spot as it meant there was urine in his abdomen and he would need surgery immediately. Understandably, his owner was very worried. 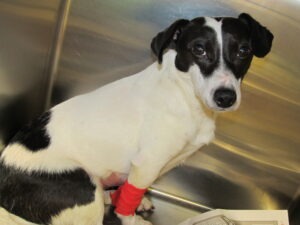 Spot’s surgery was prioritised and he was operated on straightaway. A urinary catheter was inserted and this was used along with sterile fluids to test the sutures placed to repair his bladder. If fluid leaked from the bladder, further sutures would beneeded. After a few tests, it was found that the sutures were holding and the surgery completed but Spot had an anxious few days ahead.

He was placed on i.v. fluids to help fill his bladder to see if he could urinate on his own, meaning he had to stay at City Vet for a few days. The following day, he was much brighter and was eating. More importantly, there was urine coming from his urinary catheter. This was removed and he remained on fluids until he was urinating on his own. Spot continued to improve and was discharged a few days later to his very relieved and grateful owner Mary.

Spot returned to City Vet a week later for a check up and he continues to recover well. We wish Spot a very speedy recovery!

Posted in Events, Health
We use cookies on our website to give you the most relevant experience by remembering your preferences and repeat visits. By clicking “Accept All”, you consent to the use of ALL the cookies. However, you may visit "Cookie Settings" to provide a controlled consent.
Cookie SettingsAccept All
Manage consent