Spike
Spike is a green Iguana who came to City Vet because part of his tail had turned black and it was beginning to become increasingly black along its length. Once our vet had examined Spike, he suspected that Spike’s tail had been damaged and the blood supply affected so it had become necrotic, meaning the tissue was dead. His recommendation was to amputate that part of the tail. An appointment was booked for Spike to come back to have a general anaesthetic in order to have his tail surgically removed. 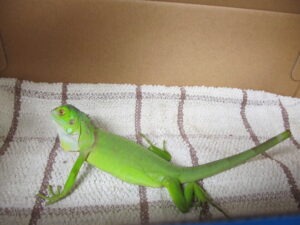 Spike was admitted to City Vet a few days later. A general anaesthetic in small animals and especially exotic animals can be particularly difficult so we had to be very careful and monitor Spike’s breathing and heart-rate closely. We also had to ensure his body temperature didn’t drop excessively. Once he was anaesthetised, his tail was scrubbed up to make sure it was sterile before his tail was amputated. He recovered well from the anaesthetic and was provided with a heat pad in his box to ensure he was kept warm until he went home. His owner reported an uneventful recovery and he continues to do very well at home.

Microchipping of Dogs Regulations (MODR)
In March 2013, Minister Simon Coveney TD announced that from 31st March 2016 all dogs would be required to be microchipped by law. This regulation already applies to puppies since 1st September 2015. For microchipping to work, owners must make sure that the registered details for them and their pets are correct at the time of microchipping, that any change of ownership of a dog is notified to the Government approved database and also any change of the owner’s details is notified to the approved database also.

Any dog microchipped before the commencement of these regulations does not need to be re-chipped. However, the owner must ensure that their details are stored on an approved database. This can be done by logging on to Fido’s chip check website & entering the dog’s microchip number along with the details of the owner. Fido will search the databases and check if the details are correct and notify the owner if not. They will then issue a compliance certificate for a nominal fee.

Posted in Events, Health, Resource
We use cookies on our website to give you the most relevant experience by remembering your preferences and repeat visits. By clicking “Accept All”, you consent to the use of ALL the cookies. However, you may visit "Cookie Settings" to provide a controlled consent.
Cookie SettingsAccept All
Manage consent