Here we give you a little insight to two interesting cases seen at City Vet recently. We hope you find it just as interesting as we did.

Jack came to City Vet as a stray cat with some serious injuries after presumably being hit by a car. He had a very sore front leg, and X-rays showed he had a fractured left humerus. He would need surgery to repair the fracture. Jack was sedated as is standard practice before anaesthesia and given medication for pain. An I.V.(intravenous) catheter was placed in the vein in his other front leg and he was put on fluids for surgery. He was then anaesthetised and hair was clipped from the surgery site, which was then scrubbed. 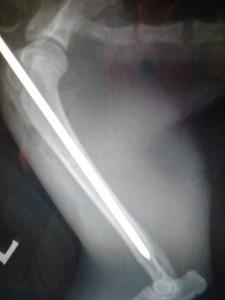 Jack recovered well after surgery and was even starting to put a little weight on his leg the following day. He was very bright and was eating happily. Of course, Jack didn’t have a name at this stage so we decided to call him Jack after the kind man who found him! His sutures were removed 10 days later and he has continued to recover very well and is now using his leg as normal.

Cassie
Cassie is a very cheeky 8 month old Beagle who escaped from her cage while her owner was out and ate a box of chocolates. Chocolate is very dangerous for dogs, with dark chocolate being the most potent. Chocolate contains theobromine which has a highly toxic effect on dogs. Knowing this, Cassie’s owner contacted City Vet straightaway.
When Cassie arrived at City Vet, she was admitted to the clinic straightaway. Our vet gave her an emetic medication. This made Cassie feel sick very quickly and she soon began to vomit. Luckily, she vomited up all the chocolates. Once we were happy she had emptied her stomach of all the chocolates, we contacted Cassie’s owner to let her know Cassie was out of danger.
Once Cassie was feeling better, she was allowed to go home to her very relieved owner. The key to saving the life of a dog that has eaten chocolate is speed. For more information on chocolate poisoning visit our blog section on chocolate poisoning here.

If you would like to keep up-to-date with what is happening at City Vet, you can sign up to our monthly newsletter by emailing your details to offers@cityvet.ie, by following us on Twitter or by liking us on Facebook.