Mammary (breast) cancer causes 52% of all cancers in female dogs, about half of which are malignant. The tumours can be small, simple nodules or large, aggressive growths. Some of the more serious tumours can be successfully treated with early detection and prompt treatment.

The incidence of mammary tumours can be as high as 71% in unspayed, middle-aged female dogs between 5 – 10 years old. Mammary cancer can be occasionally found in dogs as young as 2 years old. Mammary tumors can develop in male dogs and are usually very aggressive and have a poor prognosis.

Reducing the risk of Mammary Tumours

Mammary cancer is exceptionally rare in female dogs spayed before their first season, reducing the overall risk of cancer by more than 50%. In those females spayed after their first season there is a relative risk of 8%, rising to 26% after the second season. It is believed that the elimination or reduction of certain hormonal factors causes the lowering of incidence of the disease in spayed females.

Early spaying is still one of the best things pet owners can do to improve the health and increase the life expectancy their female dogs.

Approximately 50% mammary tumors in dogs are benign and 50% malignant. All mammary tumours should be identified through a biopsy and laboratory examination of the tissue (histopathology) to help treatment of that particular type of tumour.

The most common form of benign mammary tumors is a benign mixed mammary tumor, which contains glandular and connective tissue. Other benign tumors include complex adenomas, fibroadenomas, duct papillomas, and simple adenomas. 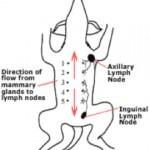 Mammary tumors present as a solid mass or as multiple swellings and are usually easy to find on examination. Initially tumours feel like small pea-sized pieces of gravel just under the skin. They are very hard and difficult to move around under the skin. They can grow rapidly in a short period of time, doubling their size every month or so.

The dog normally has five mammary glands and nipples on the right and left side of the abdomen. Breast cancer can occur in all glands, but occurs most frequently in the 4th and 5th. In half the cases, more than one growth occurs. Benign growths are often smooth, small and slow growing. Signs of malignant tumors include rapid growth, irregular shape, firm attachment to the skin or underlying tissue, bleeding, and ulceration. Occasionally tumours that have remained small for a long time may suddenly grow quickly and aggressively, but this is the exceptional.

It is not possible to determine the type of tumour based on examination, laboratory analysis is required to make a diagnosis. More aggressive tumours may metastasize and spread to the surrounding lymph nodes or to the lungs. Examination of the lymph nodes and a chest x-ray may help confirm this.

Mammary cancer spreads through the release of individual cancer cells into the lymph system (which includes special vessels and lymph nodes). Mammary glands 1, 2, and 3 drain and spread their tumour cells forward to axillary lymph nodes in the under arm area. Tumour cells from glands 3, 4, and 5 spread backwards to the inguinal lymph nodes in the groin area. New tumors form at these sites and then release more cells that go to other organs such as the lungs, liver, or kidneys.

Surgical removal of mammary tumours is the recommended treatment. If a surgery is done early in the course of this disease, the cancer can be totally eliminated in over 50% of the cases with malignant tumours. The extent of the surgery will depend on the number, size and location of the tumours. For example, if there is a growth in gland 2 on the left side, glands 1, 2, and 3 and the axillary lymph node on that side are removed. If it were found in gland 4 on the right side, then glands 3, 4, 5, and the inguinal lymph node on that side are removed. With some tumor types complete removal is very difficult and many of these cases will have tumor regrowth at the site of the previously removed tumor.

We use cookies on our website to give you the most relevant experience by remembering your preferences and repeat visits. By clicking “Accept All”, you consent to the use of ALL the cookies. However, you may visit "Cookie Settings" to provide a controlled consent.
Cookie SettingsAccept All
Manage consent