Mia is a 3 year old spayed female cat who came home late one evening with a limp. The following morning she was lying in a different place than usual with her leg in an unusual position. Her owner was understandably worried so she brought her to City Vet. Mia was examined by the vet and it was suspected that she had a fractured tibia but she needed X-rays to confirm this and to see what type of fracture she had. X-rays would also help to decide on the best treatment and also how well the leg would be likely to heal.

Mia’s Xray showing her fracture. You can also see the degree of swelling in her leg.

Mia was admitted and was sedated before being anaesthesed in order to have X-rays taken. The X-rays confirmed that she had a fractured tibia. The tibia is a bone in the lower hind limb. She would need surgery to repair it and would also need to be confined for a number of weeks to allow the bone to heal correctly but there was a further complication, there was also previous damage to Mia’s knee. During the discussion with the owner, the vet mentioned that of amputation of the leg; whilst it is a big surgery, may be the best option for Mia and the recovery time would be significantly shorter.

Mia’s owner decided to amputate the limb as it would allow Mia to be able to move around in a shorter time period.  Mia had amputation surgery the following day. She recovered very well and was discharged 24 hours later with pain medication and instructions to keep her confined while her sutures were in and to keep her wound cleaned daily. Mia returned to City Vet after 10 days to have her sutures removed and had made a full recovery. She was even starting to get used to moving around with 3 legs. She continues to do well.

Winston is a 6 year old Cavalier King Charles who was brought to City Vet for his annual health check and vaccination. During his check he was fully examined by one of our veterinary surgeons and a heart murmur was detected.  The owner had noticed him slowing down on walks and that he had a cough in the morning. Both symptoms of heart disease. 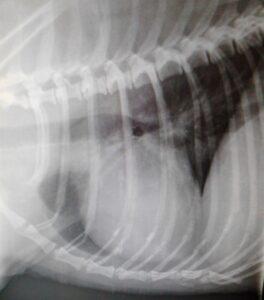 An ECG and chest X-rays were done a few days later. For the ECG, he needed to lie quietly on his side. The results showed an enlarged heart and heart valve disease was diagnosed which this breed is predisposed to. Winston was discharged with heart medication to be given twice daily for the rest of his life.

Winston had a check-up two weeks after beginning on his medication and his owners were very pleased with his progress. He was much brighter and had more energy. As with all patients on long term medication, he is rechecked every three months to monitor his condition. Winston’s case shows how important it is to have your pet checked regularly by a vet in order to help keep them in optimum health.

Posted in Health
We use cookies on our website to give you the most relevant experience by remembering your preferences and repeat visits. By clicking “Accept All”, you consent to the use of ALL the cookies. However, you may visit "Cookie Settings" to provide a controlled consent.
Cookie SettingsAccept All
Manage consent