City Vet’s newsletter for May

Cody is a 4 year old, male Bichon Frise who needed surgery to have his cruciate ligament repaired after it ruptured. Cody’s owner brought him to City Vet as he wasn’t putting any weight on his right hind leg and he was stiff after getting up. On examination it was decided to give him pain relief and his owner was advised to strictly rest him.  When he returned for his check-up his owner reported that there hadn’t been much improvement so it was decided to admit Cody for a general anaesthetic to firstly do a test to check his cruciate ligament function (called the “cranial drawer” movement) and secondly to take X-rays of the joint to see if there was much evidence of damage to it. These tests revealed that his cruciate ligament was ruptured and Cody would need surgery to repair it.

Cody was admitted to City Vet for surgery. He was sedated and an I.V. catheter was placed in his vein so he could receive fluids while he was under anaesthetic. Anaesthesia was induced and an E.T. tube was placed in his trachea to maintain his airways throughout the surgery. Cody’s right hind knee joint was clipped and scrubbed for surgery. Surgery was carried out to repair the ruptured ligament and Cody recovered well from the anaesthetic. He was discharged that evening on strict confinement and pain relief medication. 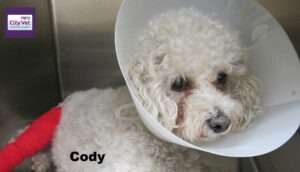 Cody had a bandage on for five days after surgery to support his leg and to allow it to heal. Care had to be taken that this bandage did not get wet or did not cause swelling so Cody’s owner needed to check it every day. At his re-check his owner said he was recovering well and was quite happy, despite being confined. Cody would return in another week to have his sutures removed.

The day Cody’s sutures were removed; the vet examined him and was happy with his progress. Cody’s recovery was aided by the fact that he was at an optimum weight. As the leg he had surgery on was bandaged and he was not to use it for some time, his other leg had to carry more weight. If Cody had been overweight, this would have put more pressure on his good leg, which may have lead to complications for him in the future. Being at an optimum weight also has its benefits for Cody’s knee which had surgery as it would be under less stress and strain when he did begin to use it again.

The recovery time after a cruciate surgery is approximately 10 weeks, provided there are no complications. Cody was not allowed to jump onto or off furniture, climb up or down stairs or jump up or down during this time. During weeks 5 through 8, Cody was allowed short leash walks, beginning at 5 minutes and gradually building up to 20 minute walks. He could gradually return to his normal activity during weeks 9 and 10. Cody continues to do well.

City Vet offers a complementary weight clinic to all our overweight patients. The weight clinic includes a tailored weight loss programme for your pet. You also get a weight clinic pack which includes a disc for your pet’s collar saying your pet is on a diet, a weight record sheet, a guide on how to help your pet shed those extra pounds, stickers for your measuring cup so you don’t over-feed your pet and a bag of treats.